That diarrhea without a colon is a trrriiipp.
Ugh.
I know I should do what I said I was going to and that is keep a better ongoing log of the bullcrap I get to go through. I've just been so exhausted. (ME?!? too exhausted to talk? pshaw you say. But yes! it is truth)
Either way, it's wednesday. I started that first chemo thursday of last week. I would expect to not be so crappy still almost a week out. And let me tell you, besides being a little tired, I probably would be just about okay, if it weren't for these damn cramps! fffuuuuccckkk....
So, the only thing I could think to pass the time since thursday, has been sleep. I really did want to go out and enjoy the really great weather this weekend, or get errands done this week (erg, damned expired drivers license) but honestly, all i've done is stayed inside and slept on and off.
I barely talked to anyone but who was in front of me, no answering phone. infrequent texts (and that is probably the rarest thing for me. for those of you who know me.)
I had lots of people seeing if I wanted to go out to things (movies, parties, bbq, etc). Which I supposed is very nice, but all I wanted to do was whole up in my house. where my bed and bathroom are in close proximity.
I have an awesomely amazing roommate who understands this, and doesn't question random naps at random times. all the time. 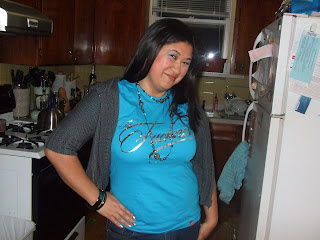 And an amazing best friend 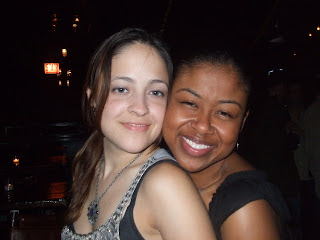 who not only understands random naps...very much encourages them. which is how scenes like this occur: 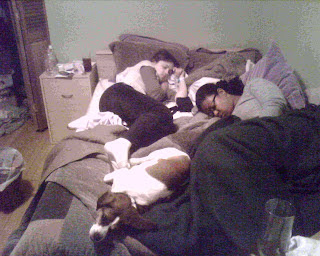 But, I promise you, even a visit like this means alot to me. I guess lots of people around me want to know what they can do, and if i need anything. And I'd love to say get me this, and i need that. But ultimately, I suppose its more about wanting to not have to be "up" all the time. I like to veg. Come veg with me. It's super easy, I'll give you a crash course (ba-dum-dum-ching!)

Chemo, is not awesome.

Rashes and acne caused by chemo when you've never had a skin problem in your life. SUPER not awesome.

Oh, and it's now 2 days before my birthday. Yay. (note super-enthusiasm in there. somewhere).

I've never not cared about an upcoming birthday as much as this one. It'd be nice to be able to eat and feel normal on my birthday though. just a small bday wish.

Well...that bed, and the ever alluring sleep beckons me yet again. Sweet dreams internetland.
Posted by Becca at 10:31 PM 1 comment:

Day one down from first infusion

I'm home from being at the doc's all day. And...I'm sure I should be typing out my experiences with it all, blah blah blah....

but instead, i'm putting up something that brings me giggles and joy. And I don't care who thinks it's inappropriate!

I recently got back from a vacation in Mexico, at an all inclusive resort. Which included alot of midwest housewives and soccer moms (some who literally announced they were there with a friend "celebrating a divorce")
every night at the hotel was "theme night" and one of the nights was "Beach Party" night.

I became so enamored with a few of the people there...I almost began stalking them, in a way.

Now, my (or should i say my moms) digital camera takes video, but no sound. I found myself sneaking over by a table and secretly videotaping one of my "favorites" dancing the night away in ever so dramatic a fashion, except the music didn't come through in the video. This is not nearly a problem for me though! NO! It only gives me an opportunity to make myself giggle even more at this simple few second vid.
I never actually met her. but i loved her. And thus...I will dub her, "Faye".
And to me...Faye was screaming to get loose, and let her inner video hoe free. so i kindly am providing Faye with some dance tunes to groove to.
and now, I present to you...Faye. in unadulterated fashion. uncensored.

Don't call it a comeback...

(yay to random hip hop references and anyone who catches em)

Hey pretty and kissable humans of the internet.
What can I say....I've neglected to communicate as much as I wanted to. You know how it goes, the best of intentions...right.

But, I feel I need to be back on this here blog, considering I have more stuff to blog about. for a bit of an update since the new year, it's been both productive and not.

I wanted to make this the year I get back on my feet. I won this great scholarship money, that was supposed to help me get some more edumacationen and get set up in the field I wanted to get into. I had new motivations. new dedications. new focus. new drive. I was busy making sure I acknowledged good things going on around me. Good friends. good food. good clothes, whatever.

I got to be in good company... 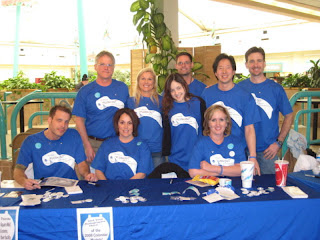 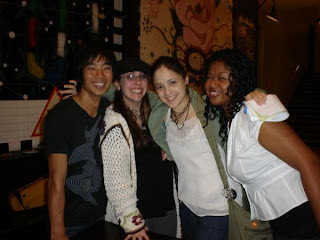 I experienced even more new things... 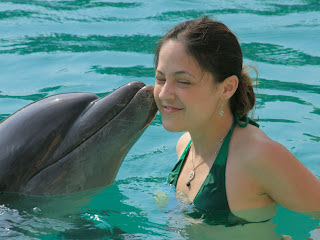 fastforward few months later to now, May 22nd, and I am gearing up to go in for some more chemo.

whaaaaa? yea. I got punched in the neck once again. Why? I do not know. a spot on my cervix decided to show up and cause ruckus. Is it caught early on? eh..i dunno. how can a reoccurance be considered 'early' or not? I mean...it's there. from the original. so I'm not sure how to view that.
Is it small? eh...I'd like to think so. I hear it's like, half the size of a dime. sounds smallish to me. But i guess I don't know how to compare it.
What's the plan of action? three to four more cycles of chemo. starting tomorrow (or today, depending on what time it is when I finish typing this).
Wonderful Folfiri, Erbitux, and Avastin. three days, every two weeks.
Then, I suppose scan me to find out how it's working, and figure out what to do from there, surgery? more chemo? who knows.

If I want to think of it in terms of the "lesser of two evils" I will say...at least it's not the liver or the lungs? I don't know how good that makes me feel. But it's something.

You wanna know what I dread the most out of chemo? And I don't care how trivial it sounds...it's the benadryl. They pump you so fucking full of benadryl its like being hit by a mack truck. A very well driven mack truck that knows exactly how to hit you so that you're still fully alert and aware but yet not able to participate or really move in any capacity.

So...I've decided..at least for the moment, that I'm gonna document stuff. Moreso than I ever did before. Paula's let me use her video camera, and even playing the role as my personal camera woman. I have camera, will travel. Lets do this. I dunno what i'll do with the stuff I document...but...i'll have it. to do whatever with.

Look to hear more from me. I guess. If I can keep it up.

Good thoughts and energy guys. Get that prayer power going for me. I sure need it!
Posted by Becca at 10:11 PM 6 comments: