It's been a lazy day for me. Not really because I wanted it to be. I actually had quite a few things I intended to get done today. It's friday, my one actual day off (don't take that to mean that I'm some sort of workaholic or anything, its not that I work hard...I just seem to be at work at least every day of the week, for at least some hours. Helps when you love the place you work though).
I digress, SO, it's my day off, and it just so happened to be an absolute GORGEOUS day, reaching near 80 degrees. Knowing that the end of April in Chicago could mean things as crazy as blizzards, I wanted to take full advantage of a full day off in good weather. I wanted to clean out my car, finish the hat I'm crocheting for a friend, bake a loaf of bread (heh....yea, i know. random. don't judge me) wanted to pick up yarn for a new baby blanket I will start, book tickets to new york for the OMG Cancer Summit at the end of May.
You get the idea, I had plans.
I had so many plans I almost forgot I had a doctor appointment today. You know why I almost forgot I had the appointment? Because I haven't had to see my Oncologist for (well, for me anyway) a stretch of time. What with being off of chemo, and my counts being good, I didn't have to see him while I was having my cyberknife stuff going on. Cyberknife is a completely different hospital, doctor, and staff, all in a completely different suburb than my Onc. Luckily, yesterday, the doc's office called to remind me.
No problem, I thought, I'll just scoot on over to see the Doc, and continue on about my day. I supposed I figure it was just a "Hey Doc, cyberknife is over now. For the moment I wait a month to get re-scanned and see how it worked. I'm feeling good, no real side effects to note" kinda visit.
My doc....has other plans.
I don't hold him at fault or anything, he is very dutifully doing exactly what I need him to do, which is worry about my numbers, my lack of treatment, and my potential cancer growing. He was nervous because my CEA counts were seen to be rising, and I hadn't been on treatment since maybe end of january or very beginning of Feb. I hadn't had a petscan since late december. The LOCAL reoccurance was hopefully being treated by the cyberknife, but he was concerned about two small spots on the ct scan seen on my liver. That could, of course, just be blips from the hiccup I had back in august with chemo-toxicity...oorrr....well, duh, we all know what the 'or' could be.
So he felt I should have my CEA drawn again, and have a scan tomorrow (saturday) and then come in to start chemo again a week from today.
YEEOOOWWZA's.
Should I be surprised? Nah. I mean, rightfully, noone ever told me I was never going to have chemo again. I was only really given a break to recoup from my skin reaction and to figure out exactly what to do next.
Should I be upset? Nah. It's happened time and time again that I come in to the office completely oblivious that I very well could be plopped in a chair right then and there, an IV plunged into my port and put on treatment right while sitting in the exam room. It's not like I'm new to this.
Should I be sad? Nah. The scan and blood test results aren't back yet, and I still am hoping for relatively good news from the cyberknife people. So theoretically, we're just trying to keep on top of things, rather than playing catch up later.

But either way, despite any of my rational thoughts, I walked out of the doctors office with all the steam let out of me. I felt defeated and punched in the gut once more. How many times have I felt that very same feeling? That feeling of "What. The. Fuck." Of "Why am I keeping on with all this? Everything that they do to me? It hasn't ended since it all began four years ago. No rest for the weary. Why do I keep at it?"

So instead of finished ANY of my aforementioned tasks...I attempted some retail therapy. (Being poor, retail therapy for me consists of Forever21 and/or a thrift store. cuz...well...I'm poor). That didn't really help as I mostly just wandered around the store and thought about how pointless it is to wear nice stylish, cute outfits...in the chemo room. But, a new pair of gladiator sandles, $2 pair of earrings, and 2 $3.50 tank tops later I walked back out to that previously mentioned GORGEOUS day to drive home. I felt maybe instead of retail therapy, maybe I could fool myself with a tasty indulgent icey coffee drink. Dunkin' Donuts called my name, but didn't fulfill any void.
After those attempts at distraction, I just came home. Avoiding all the various texts and calls. I came home, put my bread out to rise, and sat on my front porch to finish crocheting that hat. I still had that defeated feeling. That feeling of unmotivated listlessness. I tried to let myself cry. Maybe a pity party would help. I was angry and pissy and tired and worried and disappointed and...and...and...but tears didn't feel like coming. I think I was just too defeated to even make that effort.
Instead I just sat there. Watching the sky grow a bit gloomier, feeling the wind kick up, listening to my neighbors chatter away in spanish, smelling the sewage-y aroma of the canal a few blocks away waft over me.
It's going to rain. In fact, I believe its going to storm....badly. How appropriate for my mood, I thought....

Well, the entire day has passed, its a little after 10pm. I guess there's not much for me to say. or do. So, logically, the next step for my day of thwarted tasks is off to a Gypsy Dance Party. Naturally.

(oh, and in case anyone is interested, the music in background is some awesome ukulele playing by Jake Shimabukuru)
Posted by Becca at 2:25 PM 6 comments:

Sweet curls of smoke slid past her lips lazily trailing to the ground.
she leans back and lifts her chin, staring off into neon curves.
Amidst shadows and voices, she's all at once present and absorbed in her own distance.
The bassline paces her breath and her thoughts.
Clutching tightly to who she's known for years she begins a process of seperating and sorting.
In the company of chaos her ideas can be hers and hers alone.
Opinions, joys, beliefs, and fears all spin together in a hazy stream
Filtering through her carefully constructed defense she can only believe this is some form of that elusive feeling she assumed to been rid of for so very long.
The elusive Hope
Humbled to be given a glimpse of it again, she'd almost forgotten it existed.
Savory traces of it teased every pore, flirting with a fabric so fragile that every fold verged on collapse.
She quickly inhaled those curls of smoke attempting to capture what she felt
before slipping quietly off into an abyss of ambivalence once more
curiously eyeing the bodies around her, caught up in a world that has felt skittish since she lost her place in it
Could she still belong here? Would a fight be warranted? Is the taste on her tongue that of something previously unattainable?
Closing her eyes and succumbing to a delicious weight where seconds, hours, days, weeks ago there was only emptiness.
maybe its time to face the same question she's had many times before.
And search for answers within perfumed pillows of silken smoke.
Posted by Becca at 11:26 PM 6 comments:

The Girl with the Golden Cervix 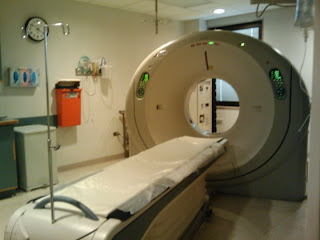 "We're just going to implant a couple seeds, Fiducial Markers actually, around the tumor. They will serve as a radiological landmark to define the target legions position with millimeter precision, allowing the Cyberknife to treat the area with greater accuracy."

Seemed simple enough, no? Last week I went in to the Cyberknife surgery center to begin this process. Fun times, guys. Fuuuunnn times. I found that for as much as I've gone through. And for as much as I tolerate, they never cease to amaze me by the crazy sci-fi things they think up. Inserting a 12 inch needle into my butt cheek all the way to the front near the cervix and then just dropping off a little golden seed using the assistance of a ct scanner to see the needle inserting in real-time?? NUTS i tell ya!

Now, I realize that I've learned to go with the flow so much that I must've assumed this little process was gonna be a breeze. As people in the waiting room outside the CT Scanner can probably attest now...I assumed wrong. 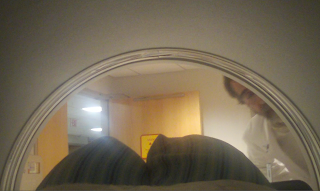 I can't, for the life of me understand why, when choosing to do this to a person, do they not automatically just knock them out? I'm sure there must be some blatant obvious reason that I'm overlooking purely because it was ME having a needle shoved in my ass. But truly, looking at it now the entire process seems so barbaric given the highly advanced and futuristic thing that I will be having done to me with this CyberKnife. 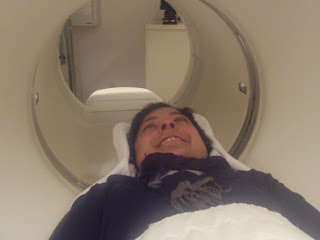 Its times like these, that I do allow myself to look at who I am from a distance and give an approving nod. I actually am one pretty intensely tough chic. Normally, I cringe if I hear someone talk AT or TO me about how "strong and stoic" I am. HA! I'd neeeevver say that about my person. But then something like needle through the ass happens and I get to take the time to look objectively and go "Hot Damn I am kind of a badass." 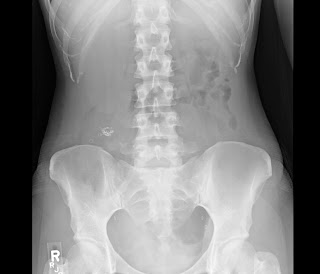 So, what the hell are they doing to me with this Cyberknife? The best I can explain is they will be using this highly focused pin-pointed extremely precise radiation machine to blast that damned tumor into oblivion as best they can. And in order to do that, the Cyberknife uses those gold markers to track. Now that I've had the markers placed, and the follow up CT Scan done, I have been given the go-ahead and the physicists or whoever are hopefully busily plotting out my treatment plan. Its anywhere from 1-5 treatments total. Each treatment being around 1 hour. I hope to know this week what my schedule will be for the treatments.
That's pretty much the cut and dry basics. And all I have time to write up at this moment. Next blog I want to divulge my back and forth relationship with a thing called "Hope" and how this cyberknife has been injecting it back in my daily life, despite all my reluctance.
Posted by Becca at 12:18 AM 7 comments: