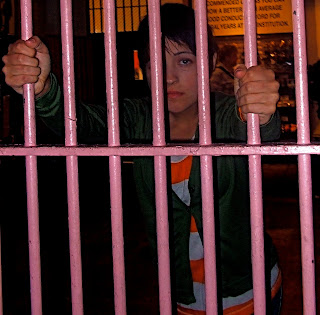 That's pretty much what it feels like. Someone whom I hadn't spoken to for a little bit asked me today if I "was any better or still doing treatment?". Before I really even thought about it I scoffed and blurted back "I'll never get any better, I'm on death row, man."
That's when it hit me.
It's essentially how it has felt to me being sentenced to unending chemotherapy just to maintain or manage the cancer that they cannot cut out of me. I am aware that the quote on the back of my Cancer Sucks shirts says "Cancer is a word, Not a Sentence" but it's moreso the idea that regardless of being diagnosed with Cancer, no matter how "well" you take THAT awesome news...in addition...you have to endure the same crap-ass treatments from there on out. Without much end in sight.
Before ever knowing cancer as intimately as I do now, I had a certain...expectation, if you will. Not that I ever expected to get cancer, mind you. But from what I knew about people who got cancer, you found out about it, got chemotherapy (honestly had no clue as to what that actually meant) and/or radiation (my preconception of this was you sat in a room and got blasted with laser beams for days on end. theoretically, I guess I wasn't far off). Than, you got some kind of surgery to cut it all out. And after all that is said and done...you're given the all clear, you're now respected and admired more b/c you were brave/inspirational/strong, and you got to call yourself by a new title of Survivor. That's how it's supposed to happen. It still actually happens to people in that way sometimes. Or, the expectation is you've found it way too late, its so far gone, you instantly just die. Note that in either of these crassly over-generalized views, do you get an ambiguous "well, you have cancer, we can't really get it out of you, or even see it, but it's there, so we're going to give you alot of drugs, lock you in to a regimen that will cement you into your current location/hospital, and really, we don't know what to expect or what will happen because of all this." That isn't how the story is supposed to go!! Damnit.
I'm not exactly sure what my motivation is. What is the impetus for walking myself into my doctors office once or twice a week, sit down in that awesome vinyl "recliner", having a needle plunged into my chest and waiting around a few hours while my body is infused with drugs that set out to destroy cells that seem to keep outsmarting us?? I ask that simply because, the more I think about all the time I spend getting treated for cancer, all I can see is all the things that get taken away from me because of it.
I can't work a full time job.
I can't have children.
I am not even entirely sure I can have sex.
I can't pay my own expenses.
I can't even have a bank account in my name.
I can't really move off to a new city.
I can't take a vacation thats longer than a week.
I can't fart.
I can't drink an iced tea.
I can't go for a full day without a few half hour visits to a bathroom.
I can't eat a salad.
I can't go to college.
I can't, I can't, I can't.

I'm sick to death of shit I can't do. I'm sick of all the trivial restrictions this b.s. has put on me. And even though I describe it as trivial, it really isn't. I may never have really wanted children. But the sheer fact that I CAN'T...as a ramification of things done to me in order to preserve my life...that human right was just blatantly taken away. And to some of the other examples I've given some may argue "oh, you can...it's just a challenge". Yes. You are correct. There are things I could do that may just be an extra challenge...I could fart....through a tube inserted into my stomach. I could eat a salad. Slowly. Chewing to mush. With a chaser of grape juice and an extremely loooooooonnnggg and frustratingly exasperating day in the bathroom later....yes.
I look at my examples and I see whining. But so flippin' what!! I think I've earned the right to whine.
Even though ultimately, its not really whining. It's just honesty. I've been living with this long enough to know that just like I will never be President of the United States...I will never be able to do or have some of the things I touched on.
And it's all cancers fault.
So basically, I'm just sentenced to the rest of my days, however many they be, being stagnantly resigned to this form of death row. It's morbid, yes. It's twisted, true. But it is.
And do not mistake this for gloom and doom. I'm simply being bluntly honest.
I am not seeking sympathy. Or fishing for inspirational words. Trust me, at one point I was THE Queen at "reframing" the situation. (who else could come up with rationalizations like: "well, radiation isn't so bad...it's laser hair removal, I get a great bikini line from it." or "being infertile and sterile isn't that awful, it's like built in birth control! I can go slut it up with no fear of babies!")
But even the Queen of it gets tired of hearing it sometimes.
Posted by Becca at 9:19 PM 15 comments:

Blow after blow,
taking me way down low.
And I don't know
how much more I can go.

Put on that smile and yes,
it works for awhile.
But at the end of the night,
I throw it back on the pile.

If I just want to lay,
completely wasting the day,
Don't need to hear you say,
I shouldn't pout in that way.

Happy isn't always right,
Laughs can't help every fight,
I know I can feed my soul
Even when pain takes its toll.
Posted by Becca at 9:23 PM 1 comment: