Apparently, I was not crazy when I thought to myself a few months back that my eyelashes (and eyebrows for that matter) had exploded into a crazy twisty crimpy outrageous mess.
Here I was, hoping and praying that shaving my head did not also mean that I'd lose my eyebrows and eyelashes...b/c you know...that really makes you look like a cancer-patient. (which is one of my top goals. NOT looking like a patient.)
And not only was I not losing them, I was literally pulling out my manicure scissors and trimming my eyelash hairs! Whoever does that?!? I'd never had to "trim" facial hair in my life. But these damn lashes kept growing out too long and then kinking in wierd places and curling back into my eyes! It was so annoying. I trimmed them, and they just seemed to grow back. And my eyebrow hairs were poking out and down and up in all kinds of directions. I had to trim those on many occasions as well.
But I still just figured maybe my hair follicles were all around traumatized and freaking out with all the stress and drugs and low-blood count, etc.
However, in a doctor appointment a few weeks ago, just before my doc was walking out he turned and peered deep into my eyes (which was a bit awkward, I won't lie). After a moment he asked if I'd noticed my eyelashes growing out long and crazy, but before he'd gotten the whole question out of his mouth I yelped "YESSS!" He explained that someone had recently approached him with the idea of marketing the drug that I've been on (Vectibux) to people who'd lost eyelashes and eyebrows in other treatments as a way to grow them in again.
I thought it completely ridiculous that ANYone would even consider taking such a horrid drug simply to get some lashes, but as my friend Jess said the other night "Honey, you'd be surprised the lengths people will go for vanity!" (she being the daughter of a cosmetic surgeon.)
Anywho, he wanted to take a photo of my eyelashes so if this marketing push ever got under way, they'd have some examples to show.
And I give you...my betty davis eyes: 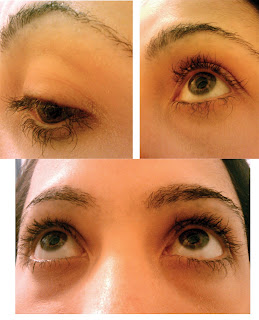